Inserting a node at the beginning of linked list

1) Insertion of a new node at the front of a given node.

2) Insertion of a new node after a given node.

3) Insertion of a new node at the end of the node.

1) Before Insertion of node at the front

3) The second Node points to NULL.

2) After Insertion of node at front

Now if we want to insert a node at front of the linked list, it should be like,

4) The second Node points to NULL. 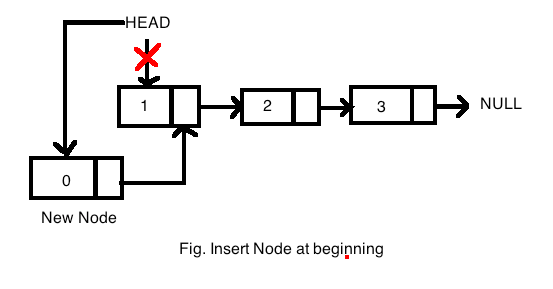 Function to insert a node at beginning of Linked List :

Have a look at the given function. To insert a node at the front side of the linked list, we have created one new node. Then we have added some data or value inside that new node. In the third step, next of new node is pointing to head pointer's next node. Just keep diagram in mind and understand the terminology behind the insertion of nodes in Linked list. Then we updated the next pointer of head node to the new node in the fourth step.

I hope you got the concept and cheer us by sharing this article in your circle. In the next part of this linked list series, we will see how to insert a node after a given node. Tada..!!

Be job-ready. Learn how to crack the interviews with industry ready training program.

What is Dynamic Programming and how to use it

This is a quick introduction to Dynamic Programming.

Let's discuss the 3 ways to check anagrams and their time complexity.

Let's discuss the difference between postfix and prefix with a practical example.

In this session, we will discuss the concept of identifiers, variables and operators in javascript with a practical example.

How to create a dropdown list in navbar bootstrap

In this video, we will discuss How to create a dropdown list in navbar bootstrap with a practical example.

Let's discuss about the navigation tabs in Bootstrap

Let's discuss about the button classes in bootstrap.

2) How to insert a node after a given node in linked list?

3) How to use %5.2f format specifier in C Programming?

4) How to insert a node at the end of linked list?

5) Article on different types of  storage classes in C.

6) C Tutorial on Calloc() vs malloc() functions is explained in depth in this article.